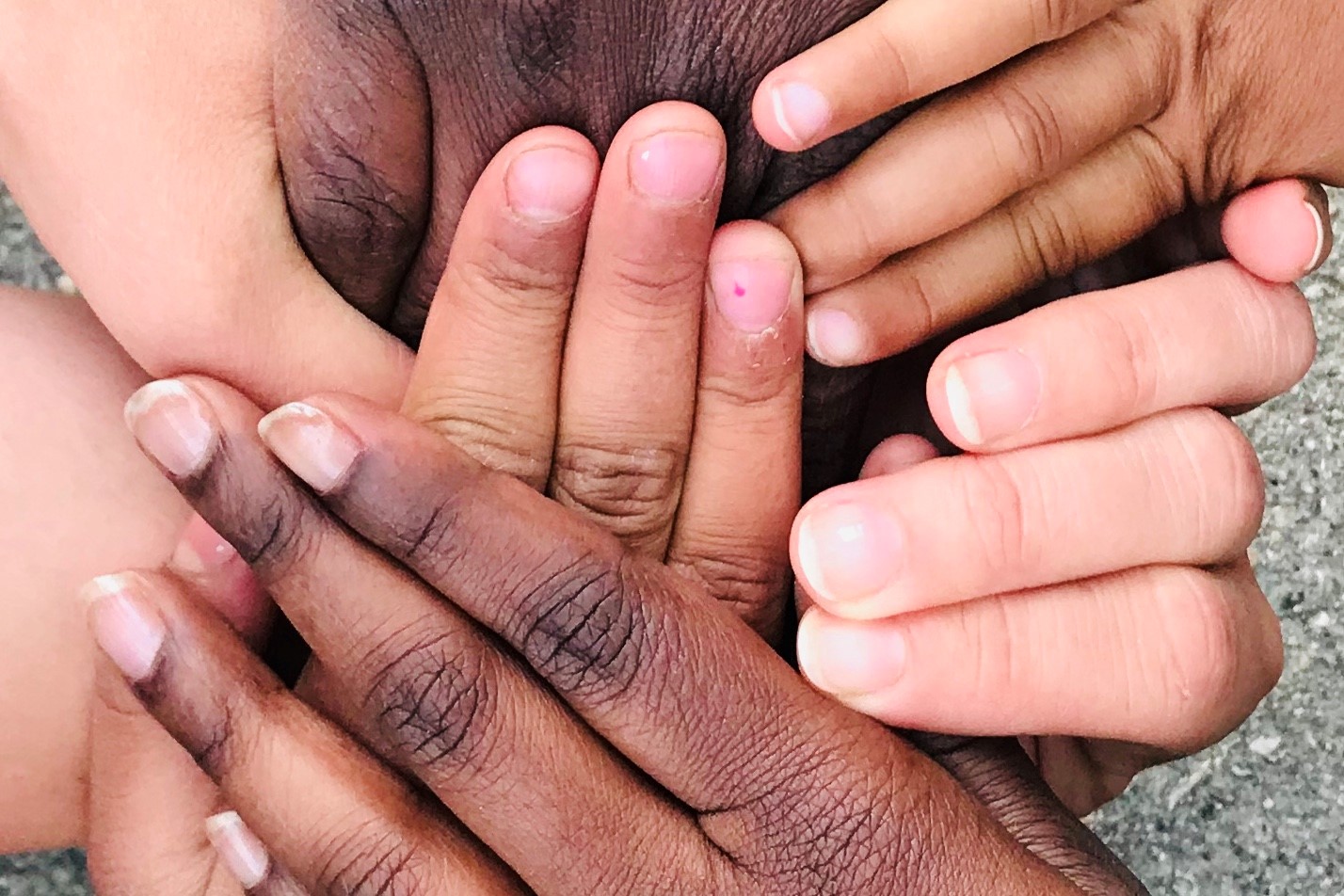 Even if you start feeling uncomfortable, please don’t stop reading. We are long overdue for this conversation.

It is such an important question. Yes, why would one of the province’s most dynamic immigrant and refugee serving organizations, whose staff team and program participants are by far a majority of people of colour, have a white person in its most influential role? A person who does not have and will never have the lived experience of racism. Is it important that the leadership of a community based organization like IRCOM have this lived experience?

Yes, yes it is important. It always has been, but it is especially today and into the future.

And so there is no good answer, or rather, no answer that is good enough. It is a truth I struggle with, not just when I am asked directly, but when I think critically about the world I want to live in, the world I want for my and our children.

When I was interviewed for the Executive Director role ten years ago, I was asked a question. I don’t recall exactly how it was worded, but I know how I answered it.

“The Executive Director of IRCOM must be an immigrant or a refugee.”

I did not name race.

Ten years ago I did not have the critical analysis and understanding of the world I have today. It has been and continues to be a learning journey; at times painful, requiring deep self-reflection, vulnerability, humility.

I can almost hear some of the responses or counter arguments to what I am asserting… “but race isn’t the only thing that matters”, “IRCOM has people of colour in senior management and management positions, and on its Board of Directors”, “it’ll happen with time, stronger representation”, “but you are a newcomer, you came as a refugee, you understand what the community has experienced”…

Race matters, race has always mattered, and race will continue to matter.  Until the whole of society wakes up, stands up, fights back, and until, especially until, white people learn to step back, race will shackle people, place glass ceilings above their heads, paint targets on their backs.

Yes, white people must step back, step aside, fight with, stand with, and suffer with people of colour. Endure together, hand in hand, the brutality that comes when people rise to liberate themselves from oppression. Stop sympathizing and start every day relinquishing space and power.

Standing with starts by acknowledging that racism doesn’t only happen “down south“. That it’s in another place. IRCOM’s buildings have been tagged with the “n” word; hateful graffiti telling our community members to “go home”; women have had their hijabs violently pulled off their heads. Racism is real in Canada, it is real in Winnipeg. Anti-Indigenous racism, anti-Asian racism, anti-Black racism, anti-Muslim racism. Unless we name it and confront it, nothing will change.

I am acutely aware of my white privilege. Even as I walk and bike between IRCOM’s two locations, in a socially and economically diverse community that has experienced so much racial and colonial violence, I don’t fear for my safety. The “white” part of me isn’t afraid.

The “woman” part of me, however, is often nervous and braced for anything. I have had the experience of sexual assault and domestic violence. I know what hate, anger, resentment, and frustration feel like at the hands of people who believed I was beneath them. And I have felt very uncomfortable when men “flirt”, make benign comments, because I’m unsure what to expect next. In those moments, I’ve felt my heart rate increase, I’ve walked away faster, clenched my keys in my hands, with one protruding between my fingers like a weapon, averted my eyes, hidden them behind my sunglasses.

Gender-based violence is known to me, but oppression of one kind cannot be compared to oppression of another kind. I have not and will never experience racism. I have experienced plenty of white privilege – when living in South East Asia my fair skin was highlighted as beautiful and meant I had an easier time travelling, getting into restaurants, doing anything and everything. When visiting India, I was complimented for how lovely my light skin was and reminded by family friends and even strangers to be careful not to expose it to the sun because it would get “brown”.

I have said it many times, when sharing the IRCOM story; my “foreignness” is invisible. Other than my name, which piques curiosity in some people and begs the question, “where are you from”, nothing else tells you I am not born in this country or how I came to be here. I have no accent, I was educated in Canada, I live in the “burbs”, and when I drive to work, I drive an SUV. I enjoy so much privilege, it is easy to sit in it; you’d think I have no reason to disrupt my own comfort.

Next, what has changed in me over time and continues to force me back into an uncomfortable space is that the people I love the most in the world live it in every day. I am watching how my daughters grow up in our community, and how differently their father and I see our roles as parents.

I have always believed that we need to teach them to stand up and fight for themselves. He was, for a long time, of the opinion that if we raise them to be polite, kind to others, to do well in school, they would have a good life and be happy. I would yell out in absolute frustration… “Politeness will not stop them from being hurt, it will not give them the job they are more than qualified for, it will not protect them from the violence they have an exponentially higher likelihood of experiencing because they are brown.” He would argue back, the world has changed, it’s not like that, it’s 2020, and they can do anything they want. Stalemate.

We’ve had many, many arguments about racism, feminism, discrimination, poverty, systemic oppression; the list goes on and on. Yes, they were arguments; we live in and experience a different world. That is until about a month ago when he went to get some groceries and came back empty handed.

“Where are the things you went to get?” I asked, confused.

“I had to leave the store.” He said this solemnly.

“Why, why did you have to leave, what happened?”

“Nothing, nothing happened, it was just….” His voice drifted off and he sat down on the couch slumping.

“Why, because of the virus, were you wearing your mask?” I wasn’t prepared for what was coming because he had never, in over eleven years, said anything like what he was about to say.

“What happened, did someone say something, did they do something?”

“No, no one said anything, no one did anything, I could just feel it, it was racism, I’ve never felt so much on the outside.”

I didn’t know what to say. I was angry, I wanted to drive there and scream at people, but scream at whom, and is it really helpful for a white woman to come into a grocery store and start screaming about racism. He pulled himself together, turned to me and said,

“Teach them to fight. The girls, teach them to speak up, you can show them how to defend themselves. I know what you mean now, I get it. They have to be ready.”

We stopped talking. Silence, he just sat there. I resumed making dinner, changing the menu because he didn’t bring the things I needed. Racism changed our meal. Racism changed the course of his day. Racism “othered” the tall, confident, capable man I know. Racism took up space in our lives and demanded I prepare my children for it. How was I, a white mother, going to teach my daughters how to live as strong women of colour?

Race isn’t a taboo subject in our home. My son from a previous relationship is white, or as the girls call his and my skin tone “peach.” The girls are visibly different tones of brown; the older of the two, enthusiastically describes everyone in the family as “peach, peach brown, brown, and black brown.” She has a sense of herself I have always respected.

When she came back from her kindergarten class a few years ago she showed us her “All about me” book. In response to the “What I like the most about me” question, the teacher wrote down the answer she was given. “The colour of my skin.”  I saw this and smiled, my partner paused. He wanted to go speak with the teacher in case it made her feel uncomfortable or maybe she had questions. I asked why that was necessary. There was nothing wrong about our child saying she likes the colour of her skin, and who cares if the teacher felt uncomfortable, we should commend our child for proudly owning this part of herself. There was no reason not to love the colour of her skin. I didn’t want to make it a “thing”. That was the mother in me, but was it the best response for her? I told her I was proud of her but I wondered, did she learn to love herself that day, or did she learn politeness? I don’t know.

I’ve pieced together these stories because the events of the last few days in Canada and in the US, have made me wonder how parents, teachers, community members, all of society faces racism. I am afraid for our families, and I am afraid for my children. But I know that by inciting fear, racism holds power.

Looking at my children, kissing their sweet faces, I’ve told them as I often do, that they can be anything they want to be. But then it occurred to me, am I telling them the truth? Can they be anything they want to be? In the world as it is today, I don’t see evidence of this possibility. I need to see more racialized people as our Mayors, MLAs, MPs, Chiefs of Police, Executive Directors, CEOs. I need to see this now.

I also thought about the privilege I have to tap out of the racism conversation at any time. It is not my lived experience, and no amount of empathy, sympathy, ally-ship will internalize for me, a white person, the true impacts of racism. But I don’t to tap out and I won’t; it is the world those I love live in, so it is the world I need to enter to be with them. So I thought long and hard, how can I continue to be IRCOM’s Executive Director without the lived experience of racism?

I don’t have an answer, not today at least, but I have an absolute, unapologetic, conviction about where I stand.

I will not serve the oppressor. I will not betray the oppressed. I am not here to rescue our racialized brothers and sisters. I am here to recognize and support their agency and their power to fight for their own freedom. I will not get in the way. I will be conscious of my own privilege, and commit myself to actively and deliberately dismantling the systems that uphold structural and systemic racism.

I will not be silent.

Please sign up below to receive our e-newsletter, Finding Home, Again and our latest news, events and stories.
You can also connect with us on social media.