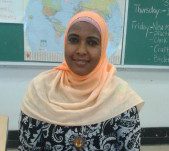 Fatuma is a single mother of six children who worked two jobs in order to provide for her family. She began English class with IRCOM’s Newcomer Literacy Initiative program and two of her children attended the child care program. Having six children, working two jobs and attending classes, Fatuma still found time in her busy schedule to volunteer and be involved at her children’s school.

It was after three months in kindergarten when Fatuma got a call from her youngest son’s teacher.  The teacher called and told her how her son was excelling in class and that his literacy skills were advanced compared to his peers. For this reason, he was moved to grade 1.

Fatuma feels that her son’s language skills progressed so quickly because he attended childcare at IRCOM. She noticed how much the childcare program focuses on getting the children prepared for school and exposing them to English.

Fatuma and her son now work on English homework together. She is also excelling in her classes.

Have a bit of extra time today? Check out our just

IRCOM usually has an abundance of amazing voluntee