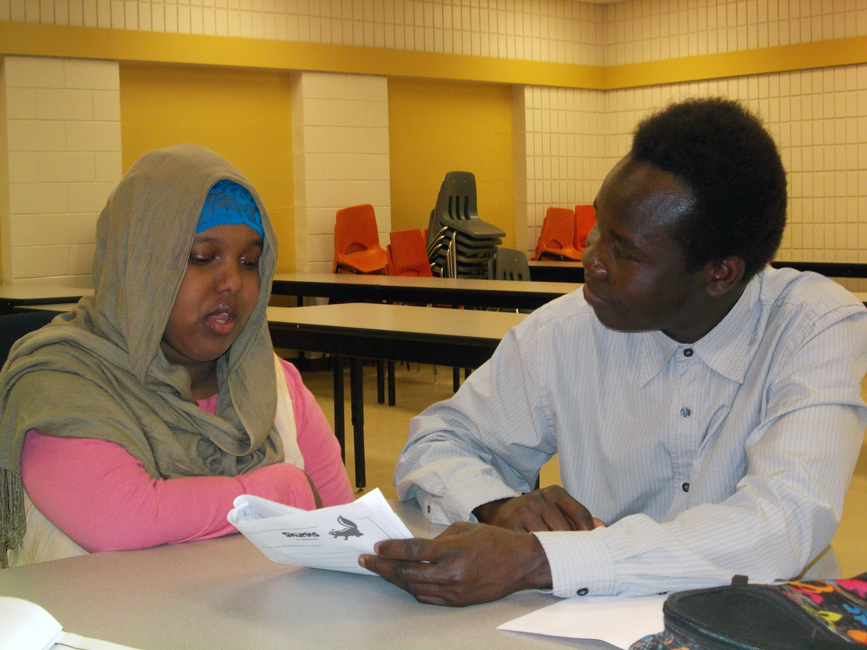 Like the tenants, staff, and program attendees who live, work, and play here, IRCOM volunteers often find themselves confronted by new situations. Such was the case for Alex Bakhiet as he looked over the next month’s schedule for the After-School Program one winter day.

“When I saw the word toboggan I asked, ‘What is it?’” he remembers with a grin as we sit in the sunshine at IRCOM’s picnic table in early June. Having come to Canada with his wife and five children from a refugee camp in Kenya in 2010, Alex had never been tobogganing before. It was a new word, representing a new experience about to be had. Eager to take advantage of the opportunity, Alex went along for the ride and loved it.

This eagerness to participate emanates from Alex. He first came to IRCOM as a practicum student from the Addictions and Community Service diploma program at CDI College on January 21, 2013. Though his practicum ended on April 16, Alex has continued on with the organization as a volunteer, showing up faithfully nearly every day to help out in the children and youth programs as well as IRCOM’s homework club. But his favourite part is running workshops.

“Organizing workshops makes me feel like I’m helping the community,” he explains. “Culture plays a big role. It makes some topics taboo.” Alex is emphatic in his insistence that good communication in the house between parents and their children is the most important step in helping youth avoid gangs.

Alex has plenty of experience with leadership to draw on as he helps facilitate these workshops. Before coming to Canada, he was a community leader in the camp where he lived in Kenya. His tasks included helping people to register as they arrived at the camp, finding foster parents for orphaned children, confirming who qualified for a new ration card, and occasionally helping tribal leaders mediate complex disputes within the community.

With all of these accomplishments to his name, Alex still makes time for IRCOM. To anyone considering becoming a volunteer, he says, “I recommend it. The environment is good. When I came they received me well. Whenever we go somewhere with the youth, we go as a team. It is good.”

For Alex, the new adventure IRCOM offered was tobogganing. What could yours be?

Have you heard that IRCOM is now 30 years old? Af

For World Refugee Day on Sunday, IRCOM staff made

It's World Refugee Day - This event honors the cou